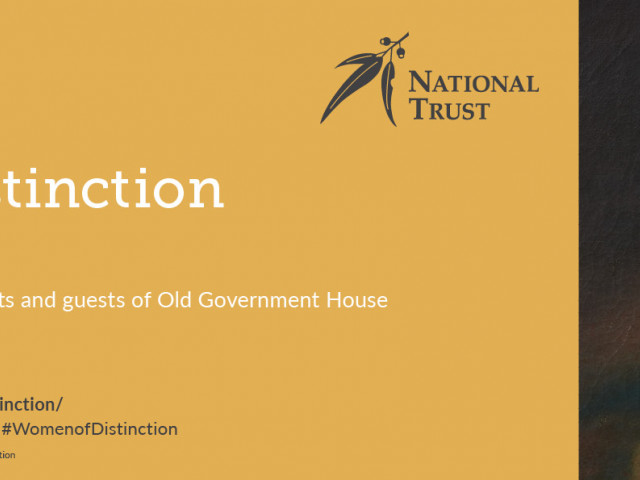 Please note, Old Government House is reopening with timed entry tickets, Thursday to Sunday 10am – 4pm from 3 July 2020. The Women of Distinction Exhibition has been extended to Sunday 29 November 2020.

Revealing the Lives of the Ladies, Guests and Servants of Old Government House

A new exhibition in the upstairs rooms of Old Government House brings together items from the National Trust (NSW)’s collections and on loan from other sources, to provide new insights into the women who lived in, worked at and influenced this nationally significant place throughout its many decades of change.

While many are known to us, such as Elizabeth Macquarie, Lady Mary Fitzroy and Elizabeth Macarthur, others remain more peripheral, overshadowed by their male contemporaries and circumstances.  And yet, so many were achievers beyond their years and times.

Learn about Anna Jospeha Coombe, who married Philip Gidley King in England in March 1791.  Four days later she sailed to the colony to live on Norfolk Island, and later became the first wife of a governor to live here.  Mary Caroline Stewart, nee Fitzroy, arrived with her husband and four daughters in August 1849 to take on the role of Vice Regal Hostess for her father, Governor Sir Charles Fitzroy, after the tragic death of her mother – a role she fulfilled to acclaim.

Discover stories of convicts and servants – most recently the Matrons who cared for the boys of The Kings School, and the women of the National Trust (NSW) who readied the property for its first Royal visit in April 1970, after its care was vested in the National Trust in 1967.

(Please note the exhibition is only accessible via a flight of stairs.)